Multi-genre, award-winning author April A. Taylor is a proud Michigan native! She currently lives in Metro Detroit and has set four of her novels in the Mitten State. Whether you want to read a Gothic Horror, Humorous Paranormal Mystery, Survival Horror, or a Psychological Thriller, you can enjoy them with a Michigan setting. 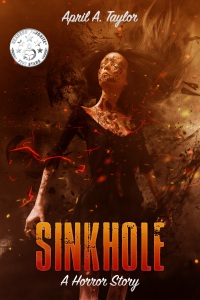 “Sinkhole is another fine look at the natural world gone mad…a worthy addition to the emerging field of eco-horror.” – Alma Katsu, author of The Hunger and The Deep

“Not for the faint of heart…Shift[s] the perspective of what a horror novel really has the potential to be. Sinkhole is an intelligent and terrifying triumph in the world of horror fiction.” – Readers’ Favorite

“Sinkhole should be part of every horror fan’s TBR pile.” – Medium.com

Could you learn to get along with a complete stranger – or even your worst enemy – to save your life?

A sinkhole swallows a girl in Michigan. Fire shoots into the sky in Pennsylvania. Deer attacks leave people hospitalized in West Virginia. And this is all just the beginning of a catastrophic series of global events that will make you question everything you think you know about the planet, nature, and humanity.

From an award-winning, Amazon #1 best-selling author comes this harrowing tale of a world gone mad. Can anyone survive when Mother Nature unleashes her bad side?

The Haunting of Cabin Green: A Modern Gothic Horror Novel 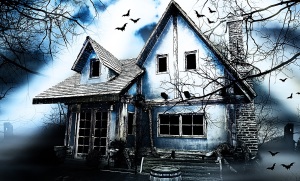 “A spectacular read. Absolutely gripping. I couldn’t force myself to put it down.” – The Horror Report

Going to Cabin Green alone after the death of his fiancée was Ben’s first mistake. His second mistake was tempting fate by saying, “There’s no such thing as an evil building.” Now he’s caught in a nightmare of his own making deep in the woods of Northern Michigan. Even worse, a family history of mental illness makes it impossible for him to know if the ghosts haunting the cabin are real or all in his head.

This modern Gothic horror story takes the reader directly into Ben’s hellish experience. Is he crazy? Is a ghost haunting him? The only way to find out is to make it to the end of this deep, dark thrill ride that’s filled with more twists than a roller coaster.

“A great read…steady-paced, with plenty of actions and a few twists you won’t see coming. This is an excellent start to a series, a story that hooks you enough to make you want to read the next one.” – Readers’ Favorite

“This was the best mystery/paranormal story I have read in a long time…It kept me genuinely enthralled from beginning to end. Oh, and that ending!!! I can’t wait to read the next Alexa mystery. I’m sure it’s going to be another wild ride!” – Boundless Book Reviews

Is she a medium? A psychic? Alexa Bentley only knows one thing for certain; she can talk to ghosts. And sometimes, they take her advice. Missing in Michigan is ideal for fans of the Sookie Stackhouse Southern Mysteries, quirky female characters, and the Paranormal Mystery/Supernatural Suspense genre. This exciting, funny series will keep you guessing!

Alexa’s unusual ghost therapy skills take her to a remote corner of Michigan’s Upper Peninsula. But this case is much trickier than anything else she’s ever encountered. A grieving ghost, several missing teens, and a supernatural creature from Native American folklore stand in her path. Along the way, she manages a bit of romance and lots of witty humor.

It begins with a deceptive cry for help. Before it ends, a quiet Detroit suburb’s illusion of safety will be shattered forever.

Anna’s world is turned upside down after a mysterious couple tries to gain access to her apartment. Soon, she begins seeing them everywhere. At the same time, a series of loud banging noises keeps emanating from the apartment behind hers. Are these incidents just a coincidence? Or do they have something to do with the gruesome serial murders that begin to plague her town?

Anna will need to piece the clues together despite many obstacles, including the disbelief of the FBI and her friends. Making things even more complicated is her daily struggle with fibromyalgia, along with a secret past that threatens to completely destroy her credibility. Is she on the right track or is the entire thing a figment of her overactive imagination?

Although the rest of April A. Taylor’s books aren’t set in Michigan, they were all written in the Great Lakes State. Show your Mitten Pride by supporting a local author! All of her books can be found here: April A. Taylor’s Amazon Author Page. Be sure to follow her on Amazon to be one of the first to learn about new releases.